Here is a look back at some work I did for Amateur MX Magazine in 2008. It covers KROC 2008 with 8 pages of images, text, and results. 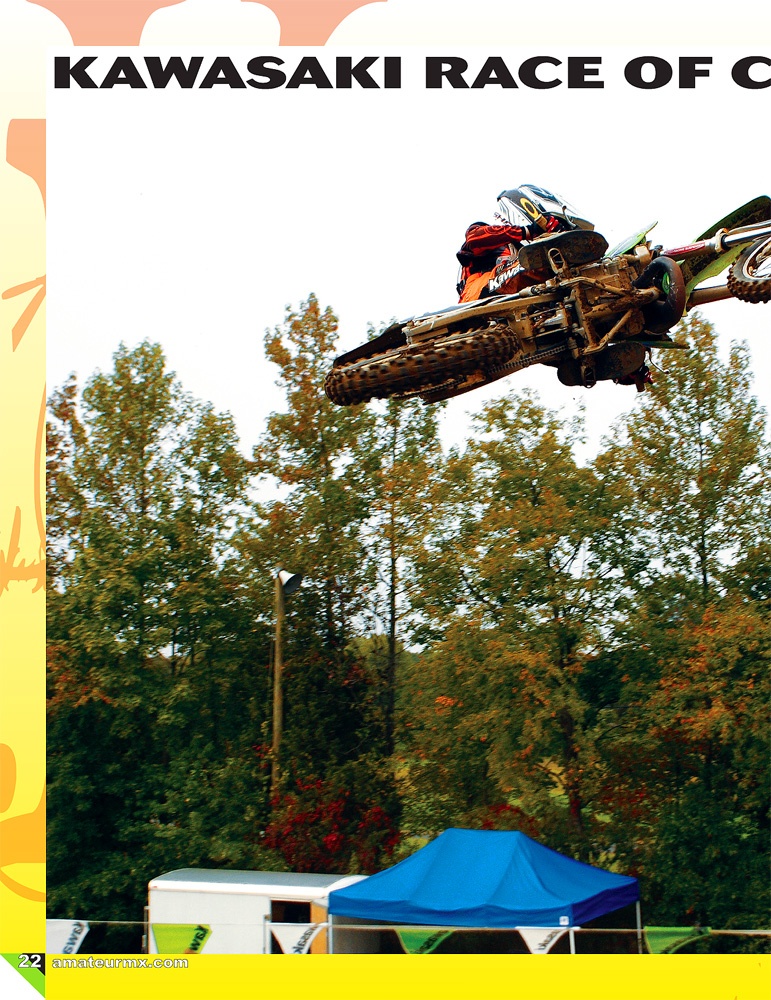 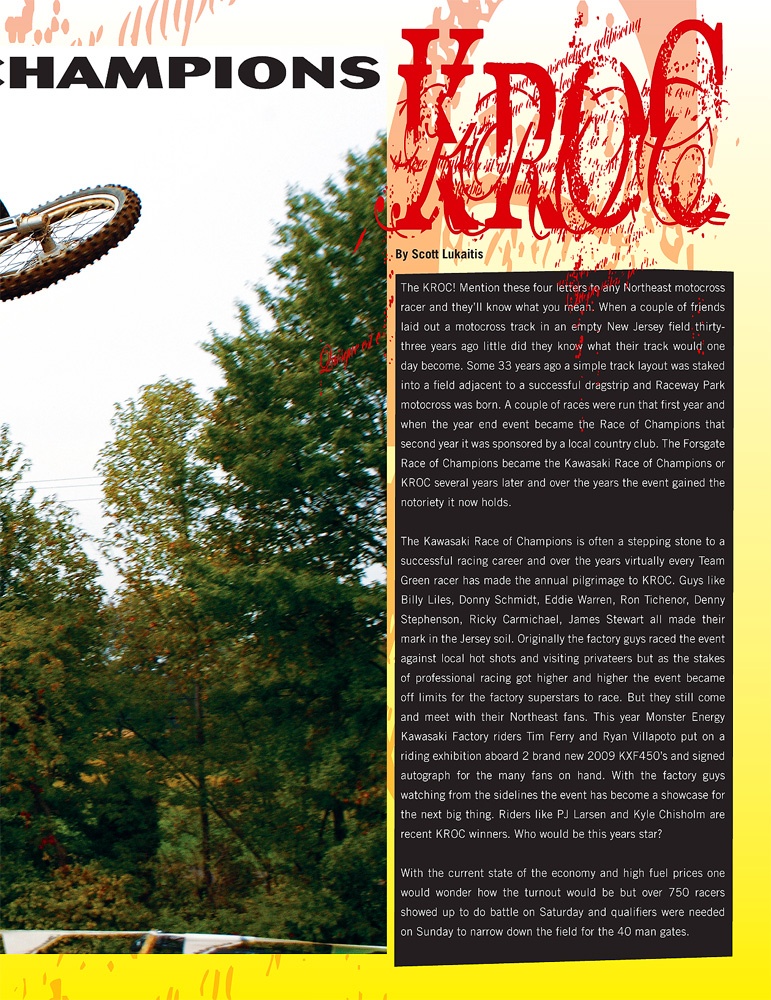 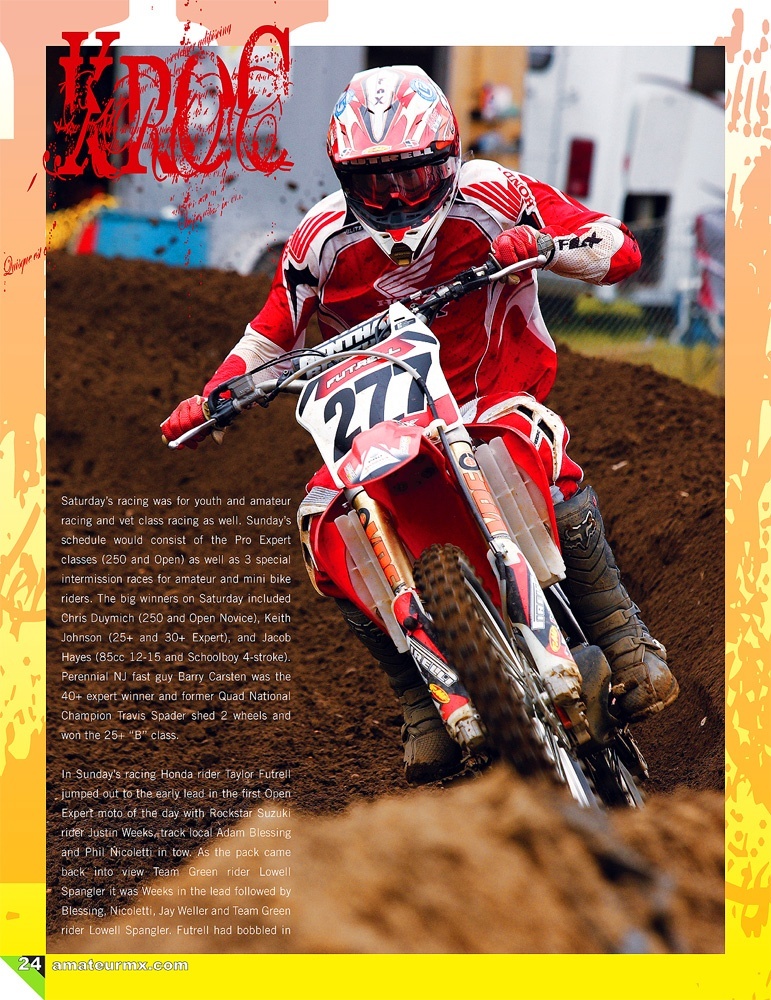 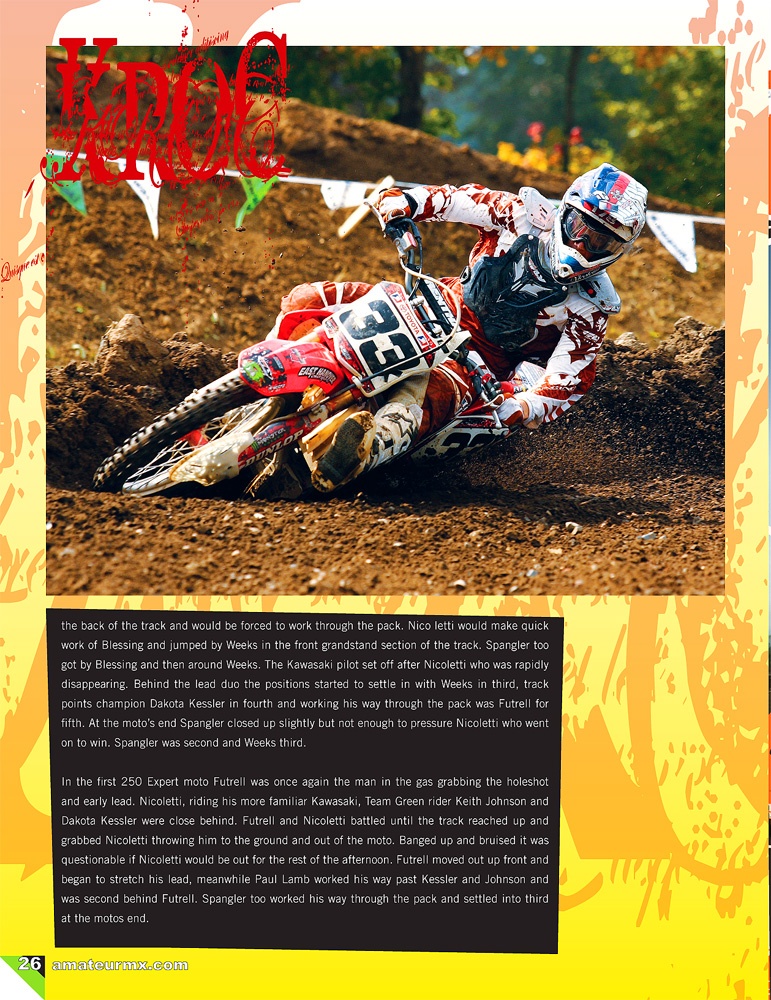 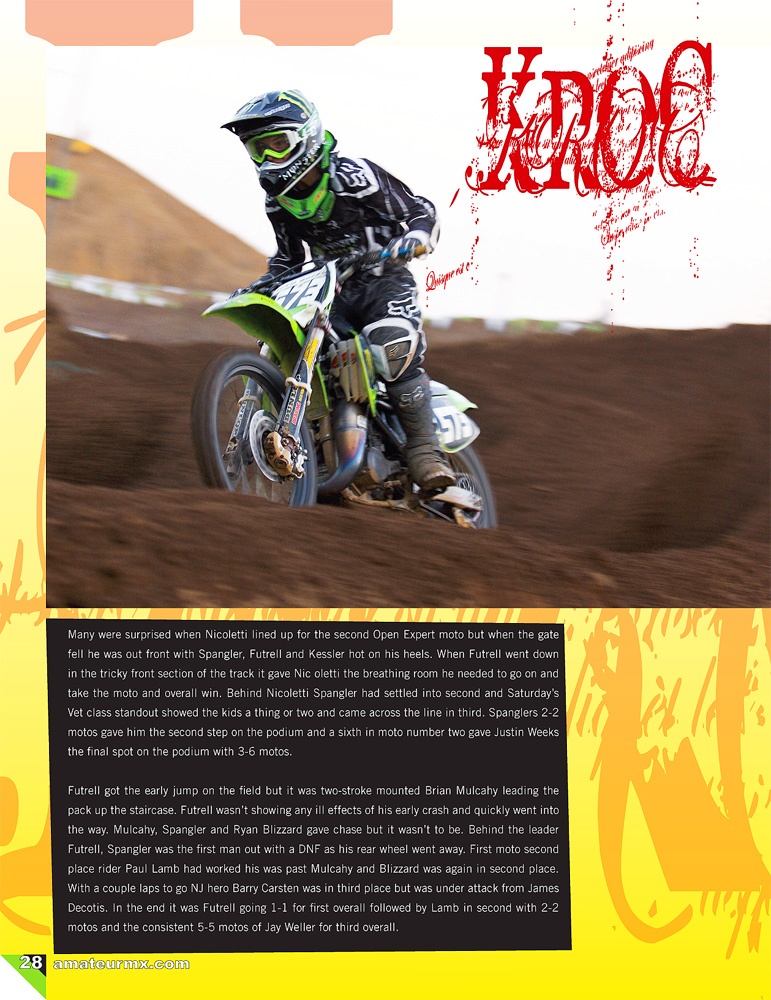 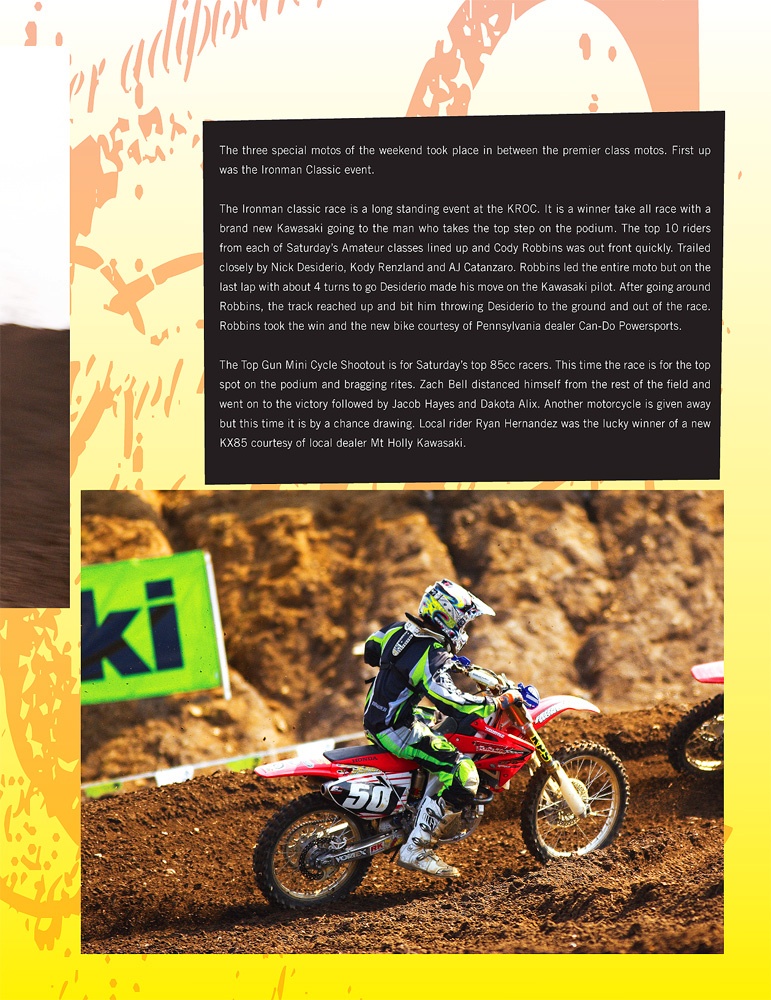 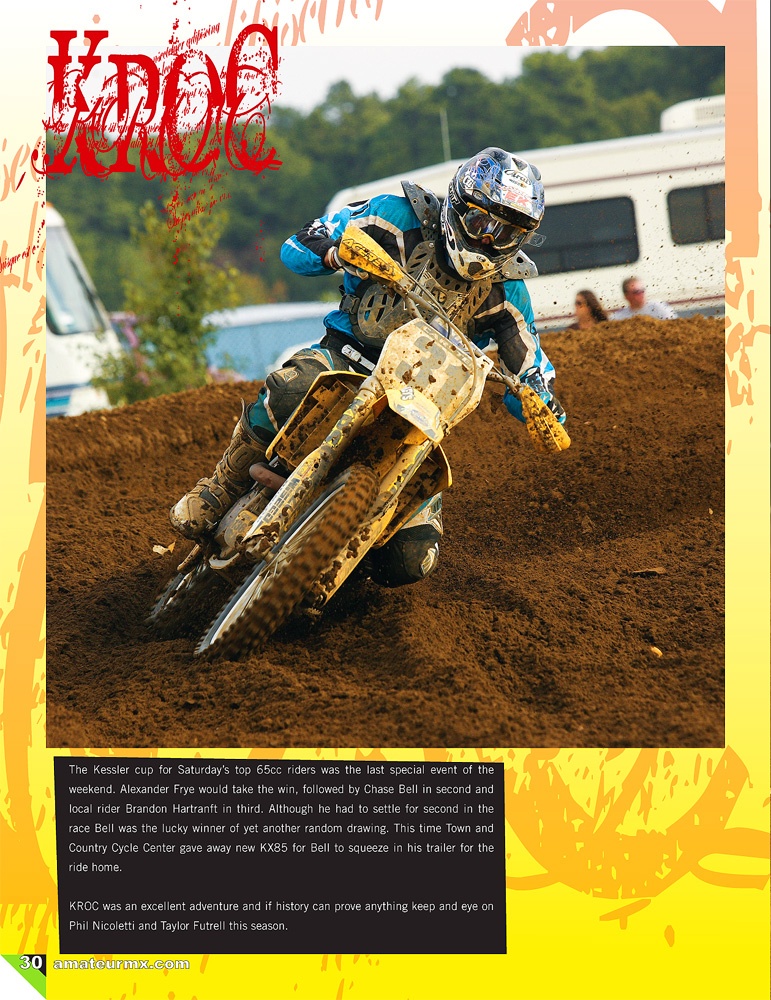 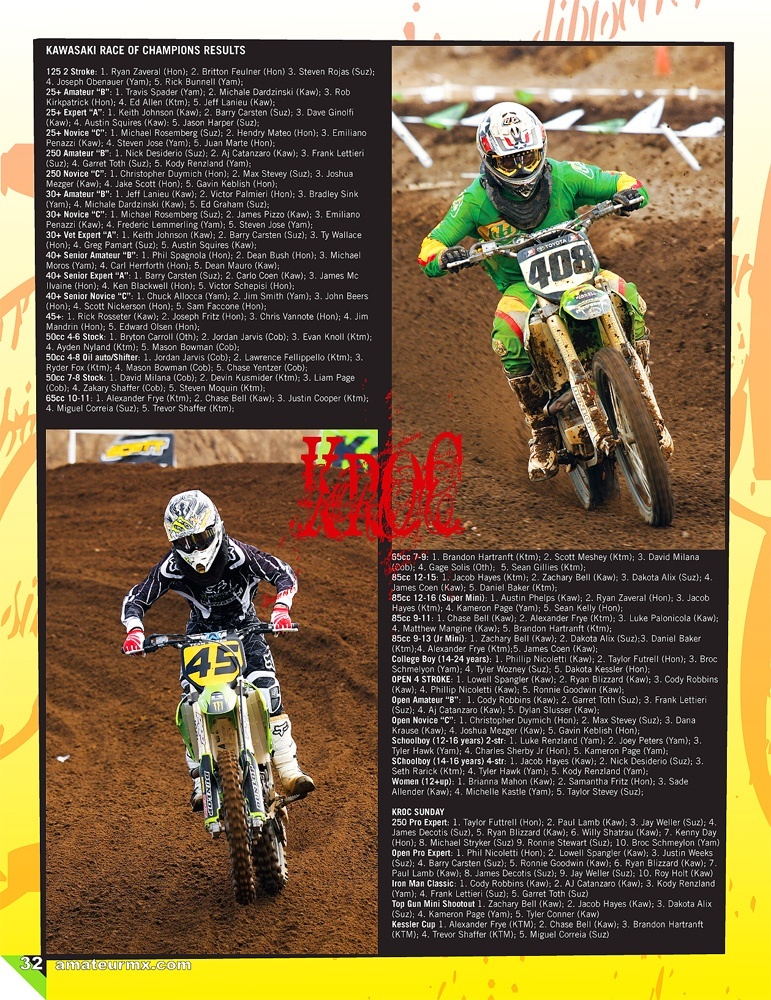 In 2018 I worked with the Legends and Heroes of Motocross Tour to create and distribute their weekly press releases announcing the legend they were honoring each weekend. Below is a release that was drafted in collaboration with Sean Brennan from Feld Entertainment and Alex Moroz from the tour that wraps up the 2018 season.

SYRACUSE, N.Y. (May 25, 2018) – The Legends and Heroes Tour traveling moto museum would like to thank all the sponsors, honorees, guests and friends for a successful series of 2018 Monster Energy AMA Supercross, an FIM World Championship.

The mobile museum crisscrossed the country with 16 stops in 13 states coast-to-coast and as far north as Foxborough, Massachusetts and as far south as Tampa, Florida.

Not just reserved for each event, the Supercross VR Experience was also deployed to offsite locations at various radio and television outlets the week leading up to each event. In total, more than 50 different media outlets experienced Supercross through the program. Local celebrities tried the virtual reality goggles and spring bike, showing their fans the fun and excitement of Supercross through their social sharing.

Additionally, local FOX, CBS, NBC and ABC stations, as well as various other television, radio and media personnel, jumped on the bike and got a first-hand glimpse of the intensity and athleticism required to compete in Supercross. More-often-than-not, the experience elevated their heart rates and put smiles on their faces, which made for exciting footage that helped promote the upcoming event.

“From a PR standpoint, the Supercross VR Experience was a fantastic tool that we could use early in the week prior to our athletes arriving,” stated Sean Brennen, Public Relations Manager, Feld Entertainment. “It also served a broader initiative in that we are trying to expose more people to the joy of off-road motorcycle riding while also illustrating the athleticism of our Supercross racers.”

The Legends and Heroes tour stands behind the belief that “We Don’t Leave History Behind” and has kept the founding fathers and mothers pure in their thoughts by honoring the men and women that shaped Supercross and motocross into what it is today. During the 2018 season, the following individuals were honored for their impact on the sport of Supercross and motocross.

With nearly 5,000 square feet of display space at each event, the Tour was a must-see stop during the Pit Party. Thanks to local friends around the country, each week, the Tour featured some of the best vintage motocross bikes on display in a single location. With different vehicles at each round, guests were able to relive the machines of their youth and show their family and friends what the early days of motocross and Supercross looked like.

“Since 2009, the Legends and Heroes moto museum has had the privilege to be a part of the Monster Energy Supercross series,” said Alex Moroz of the Legends and Heroes Tour. “It has been an epic journey for us bringing the history of our great sport to the fans. Over the last nine years, hundreds of thousands of fans have visited the tour and shared the historic vintage bikes, period race gear and the stories of our rich history of motocross and Supercross.

Stay up-to-date with 2019 planning and see behind-the-scenes footage and great vintage photos and stories by visiting the official website at legendsandheroestour.org or follow via social channels:

About the Tour: The Legends and Heroes Tour is a professional, historical display and timeline of America’s greatest motorsports, motocross, and supercross. On-site, the tour encompasses nearly 5000 square feet of moto-history with bikes, gear and other memorabilia that transport our guests back in time through the history of the sport. Visited by more than 9 million guests during its previous seven years of existence, the Legends and Heroes Tour attends each stop of the Monster Energy Supercross Series and Lucas Oil Pro Motocross Series. Visit us in the Pit Party at a supercross or motocross near you or online at legendsandheroestour.org.

About the American Motorcyclist Association:

Founded in 1924, the AMA is a not-for-profit member-based association whose mission is to promote the motorcycle lifestyle and protect the future of motorcycling. As the world’s largest motorcycling rights and event sanctioning organization, the AMA advocates for riders’ interests at all levels of government and sanctions thousands of competition and recreational events every year. The AMA also provides money-saving discounts on products and services for its members. Through the AMA Motorcycle Hall of Fame in Pickerington, Ohio, the AMA honors the heroes and heritage of motorcycling. For more information, visit americanmotorcyclist.com.

Mini Rider Magazine. January 2007 issue. This was race coverage of the 30th annual Race of Champions held at Raceway Park in October. The main story was featured on pages 40 through 45 and featured words and photos as well as a mini interview with Nick Desiderio. 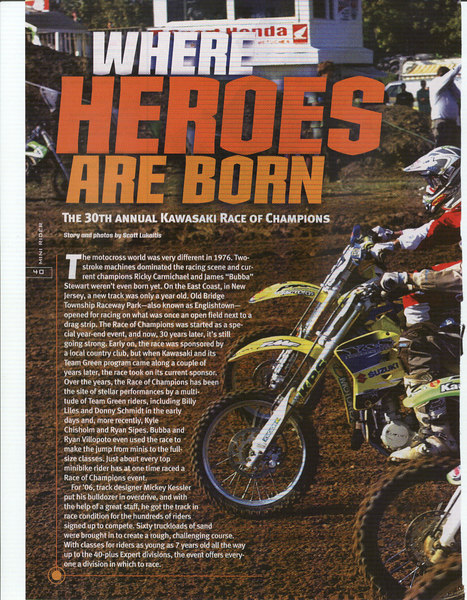 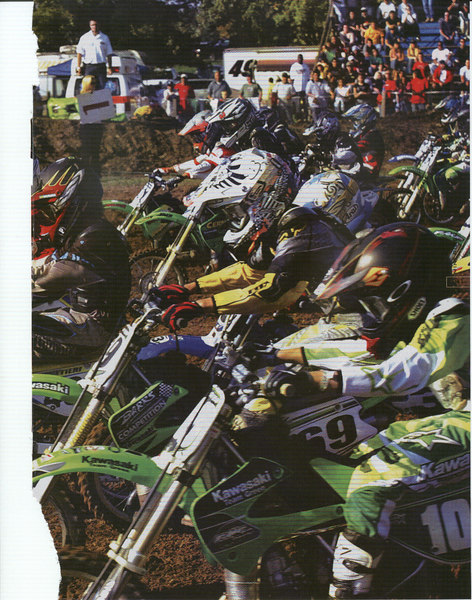 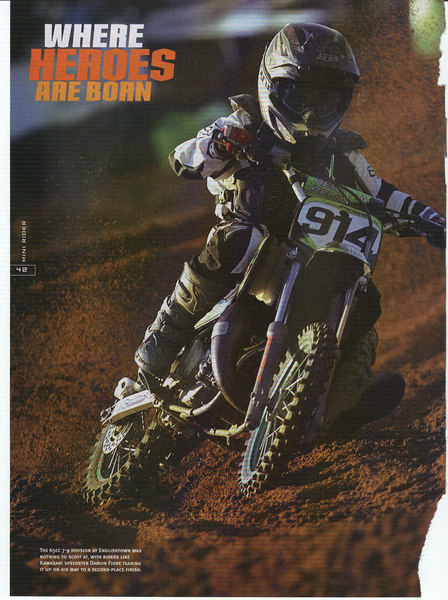 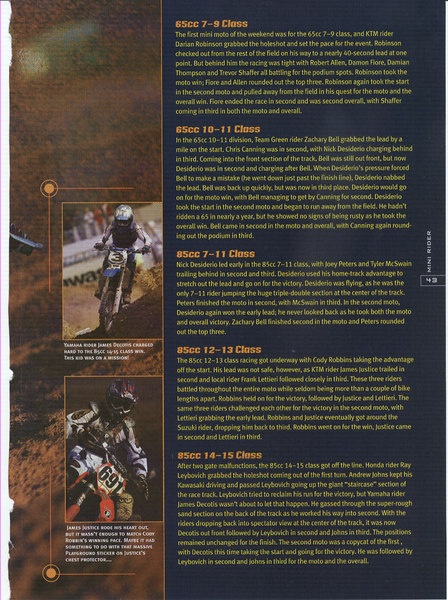 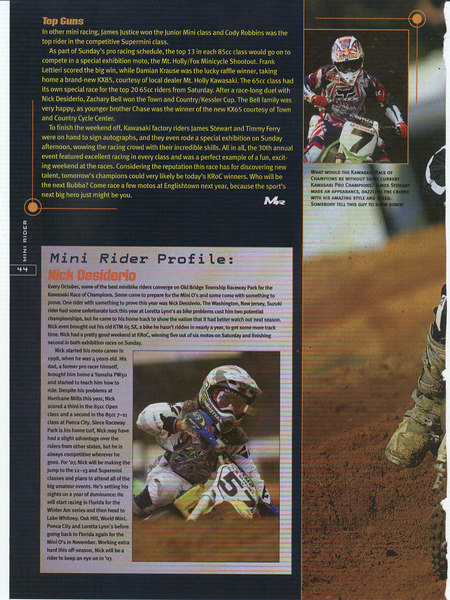 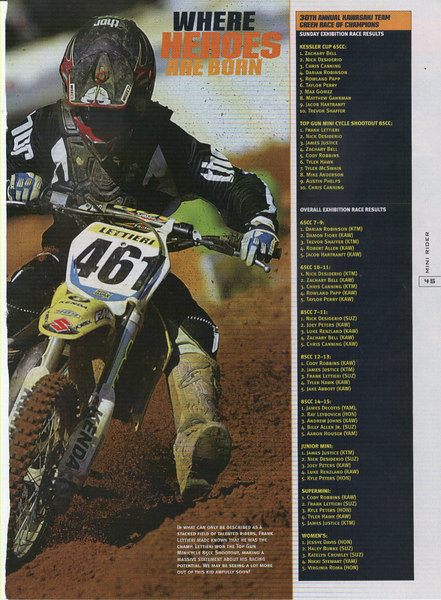 This week’s flashback is from 2006 and Mini Moto magazine. At the height of pit bike popularity, this magazine provided race coverage and hop-up for the niche market. It wasn’t uncommon for guys to spend thousands of dollars on the pint-sized machines. The pit bike scene was a mix of fun and seriousness that lasted for a short time in the late 2000’s with races at local and national tracks and a supercross/arenacross in Las Vegas each year. It is experiencing a slight resurgence but unlikely it will ever reach the numbers it once had.

Here is an article that I produced the images and text for.

Mini Moto magazine. Issue #5 2006. Words and photos. This 2-page feature was an overview of the Trapani Pit Bike Series held at Raceway Park during the 2006 season. The article appeared on pages 76 and 77. 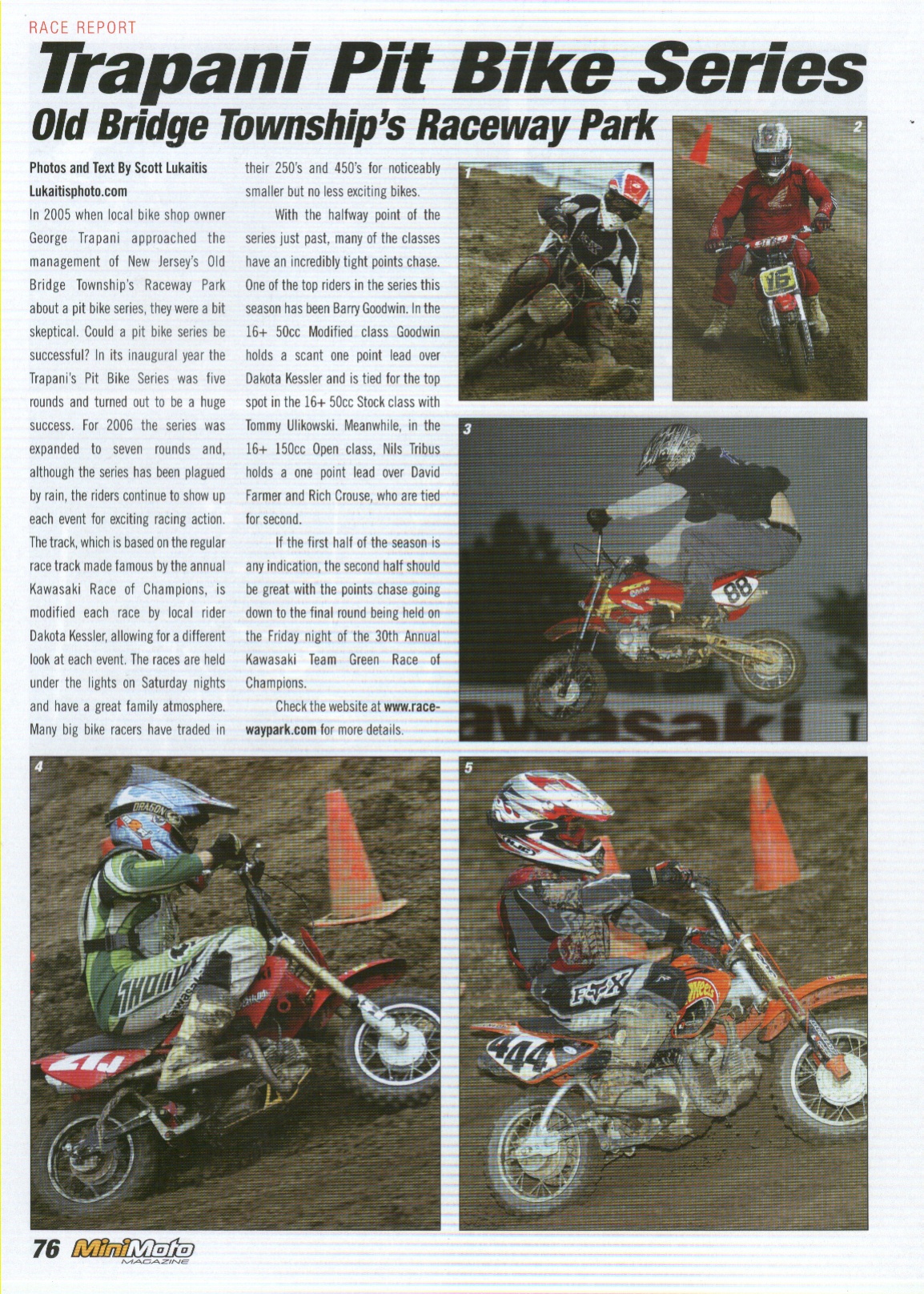 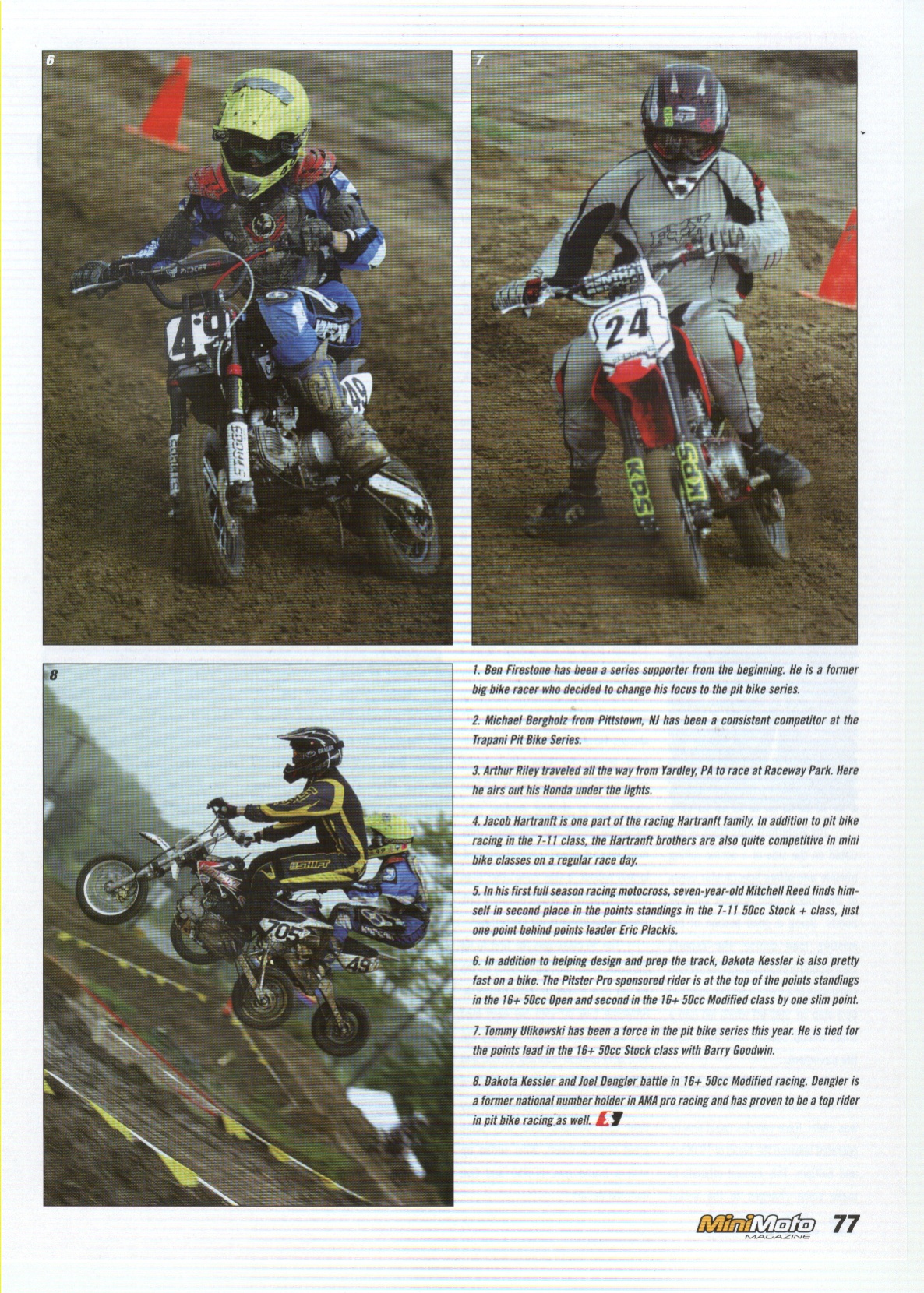 Cycle News Issue #45 November 15, 2006. I provided coverage of the October 14-15 Thunder On the Beach Wildwood NJ. The article appeared on p.43 and featured text, results and an image of the weekend’s big winner, Jeremy Cook. 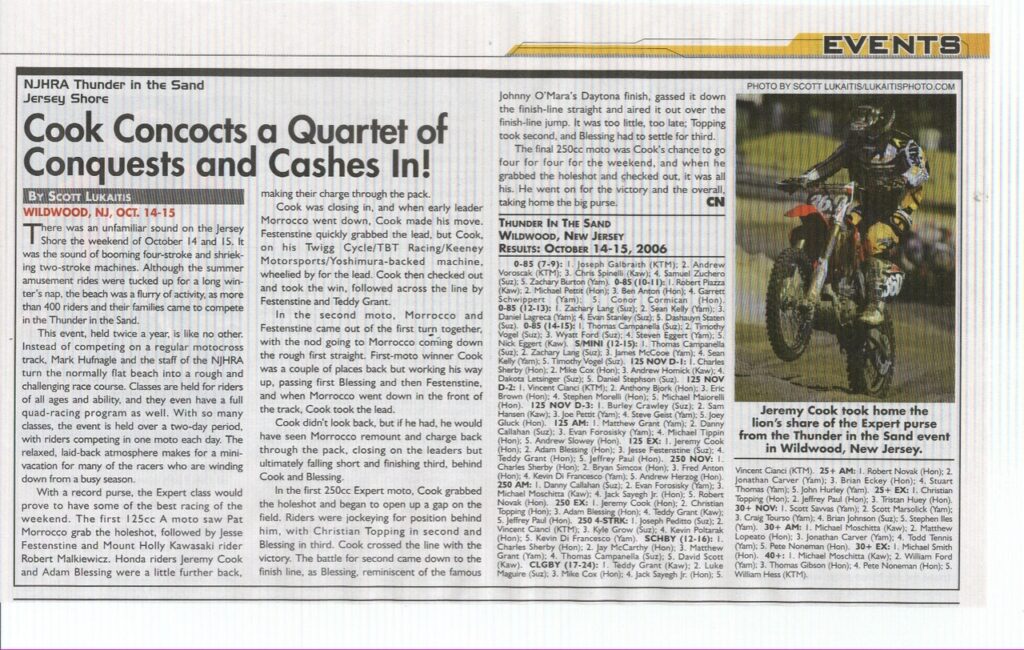 A Look Back at Published Work – ATV Sport December 2006

Here is a look back to 2006 and some coverage I provided to ATV Sport Magazine. The coverage was of the WPSA Quad Championship event held at Raceway Park in August 2006. The coverage ran in their December 2006 issue and I provided images and text for the 6-page spread. 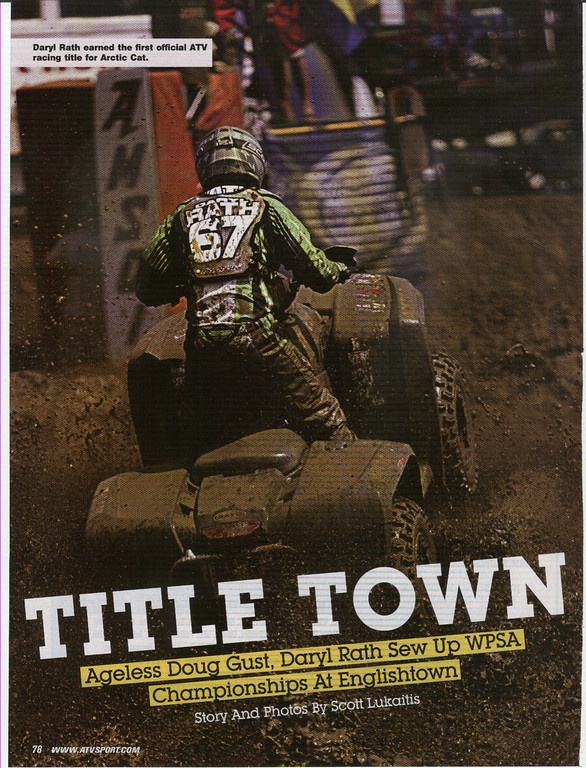 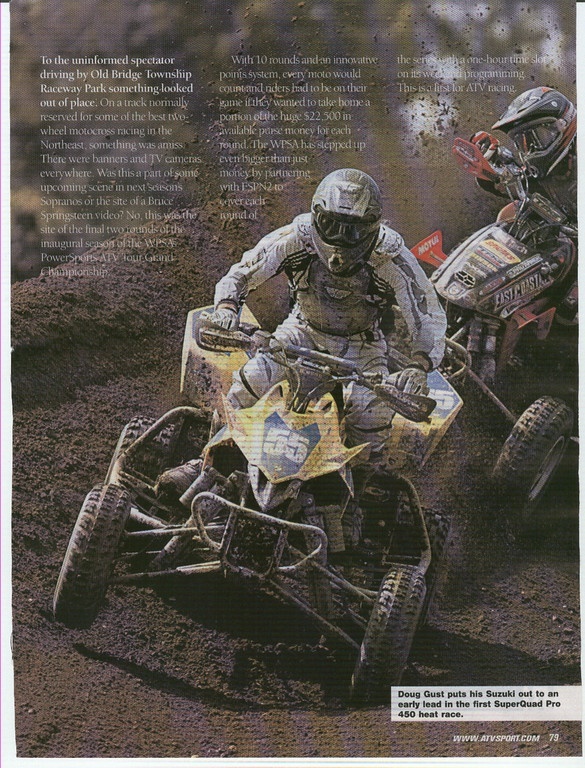 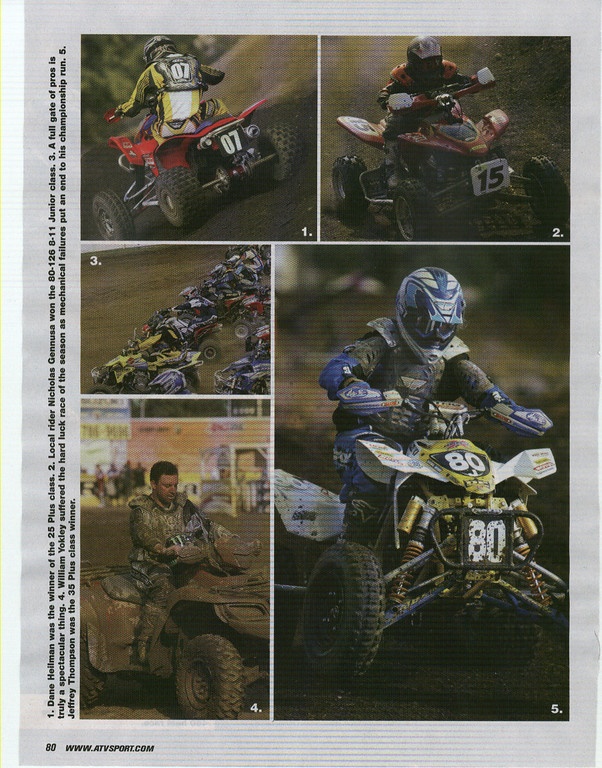 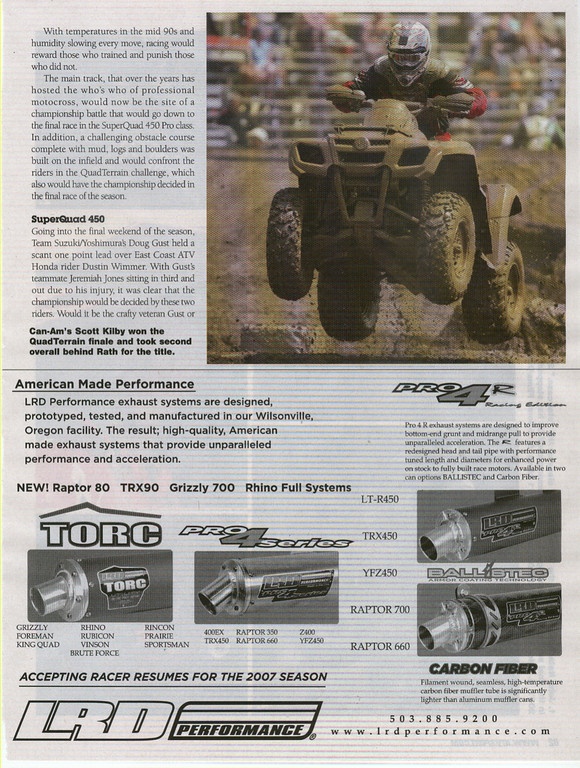 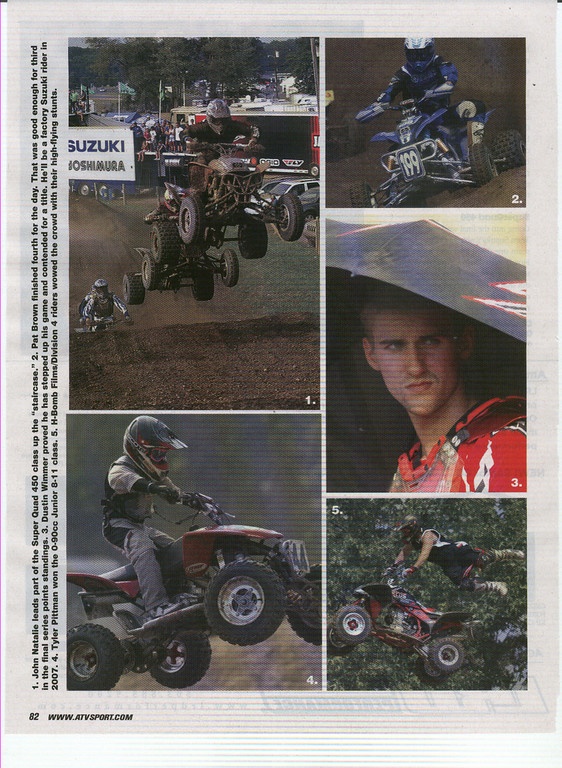 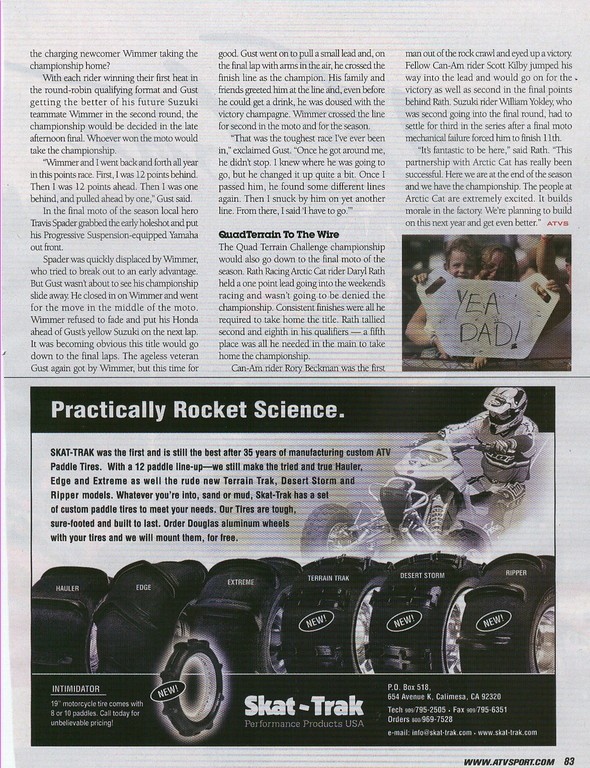 I came across these photos when looking throw my o

What are you getting done this weekend? Thank you

Another one from 1998. - The Slater Skins in actio

Another from 1997. The flagpole double at Raceway

Moving on to 1997. Clean design on the graphics an

Last one from 1996 Photo by Thom Veety Action Pho

Another from 1996. Looking pretty good here with m

Back to the Monster Truck shows. I think this is W